At first, Qamar was Quinn, a stunning photo image trotting across a stubbly brown field under a dome of blue Colorado sky. His silver coat sparkled, his black mane and tail whipped in the wind. The ad said, “5-year-old Arabian, halter broke and coming along with Parelli Seven Games.” 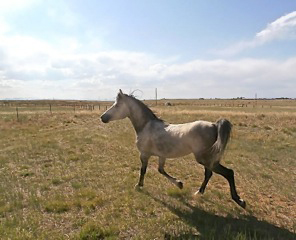 I was captivated (well, truthfully, I was hit – hard! – by the thunderbolt) but I was conscientiously and rigorously focused on finding a calm, steady, completely trustworthy trail horse of 8 – 12 years. I was getting older, and my beloved Thoroughbred was long gone. I wanted another big-hearted horse, but one even more trail-worthy from the get-go. I saved the ad for the beautiful Arabian, telling myself it was about the photo, not the horse.

Sure. Six weeks and two other semi-serious equine possibilities later, I stood in that same field with Quinn and his young trainer. I was listening to the trainer describe her training methods when Quinn reached out and abruptly planted his lips over my face from chin to nose. He hesitated for a moment while I stood planted in place. Then he withdrew with a loud sucking sound that could only be described as a big, fat kiss.

I reacted with a laugh, but I cried all the way home. That kiss sealed our conjoined fate. What was I going to do with an unbroke, terrified and explosive (but incredibly sweet, eager – and obviously silly) newly gelded, immature Arabian?

Answer: Stake a claim – him as mine, me as his. Put him in training. Tend to his health. Take him home. Fall more in love every day.

According to friends who can read his pedigree chart, Qamar (“moon” in Urdu) is part Polish and part Egyptian Arabian. Our first year together focused on his health. With the help of intensive nutritional supplements, Qamar grew an inch and a half! He now stands at 14′, 2-1/2″.

Qamar is very smart and funny and absolutely loves to learn. At first we questioned if he would ever be ride-able; he had some old injuries sustained before the young woman bought him. I’m happy to say that after extensive bodywork and slow, very quiet training, Qamar is ridden by the trainers at Happy Dog Ranch in Littleton, Colorado.

Qamar lives in a herd with 13 other horses. In his initial foray into herd life, he rounded up and led a pod of two mares and a filly back and forth to the pasture every day. Once he felt more comfortable in the herd, Qamar settled into his current role. His self-appointed job, described to an animal communicator, is to “hold a safe space” for incoming rescued horses. Qamar befriends each new horse, shows him the ropes, plays with him tirelessly, and when the newcomers are ready to be more autonomous, they drift apart. 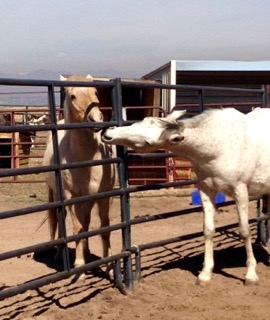 Qamar is an amazing teacher, partner and friend to me. I’m happy to share what I learn from him with you.

And yes, that’s my beautiful boy with me in the Horse Hungry logo!